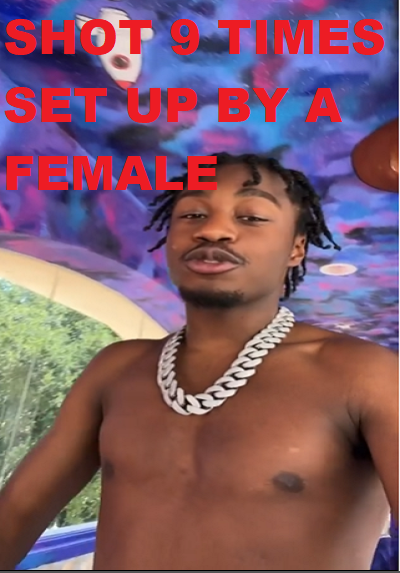 Rapper Lil Tjay Shot in New Jersey some hours ago in a set up by a female and famelord.com has all the details and Footage as Lil Tjay Battles a critical condition.

According to real-time reports reaching our reporters Lil tjay was shot some hours ago in what the police are calling a targeted hit, amd the shooters are alleged to have sped off in a black Cadillac after accomplishing their aim.

HOW DID LIL TJAY GET SHOT?

Lil tjay was shot at when he was leaving his fancy high-end apartment with the woman he spent the night with, his security detail was still inside the condo when lil tjay was shot.
The police put this out immediately after the shooting was reported

Major Crimes Unit and Edgewater PD are investigating a shooting with 2 victims around midnight on 6/22 at 14 The Promenade in Edgewater. More details to follow.

WHO IS THE FEMALE THAT SET UP LIL TJAY?

After lil tjay was shot a lot of social media users have been looking for the female that was with him when he was shot and it is alleged that it was one of these sisters that set up Lil Tjay.

Footage Of The moment 20yrs old rapper Lil Tjay was loaded into a waiting ambulance has found it’s way into social media.

The video shows a clearly critically wounded Lil Tjay been loaded into an ambulance, you can also see the paramedics applying pressure to the wound.

Footage Of Lil Tjay On The Brink Of Death Loaded into ambulance 💔https://t.co/V5imPY4aRN pic.twitter.com/GpNzaZ0pmu

JT Before Surgery BBL, City Girls TheGirlJT Before and After Pics