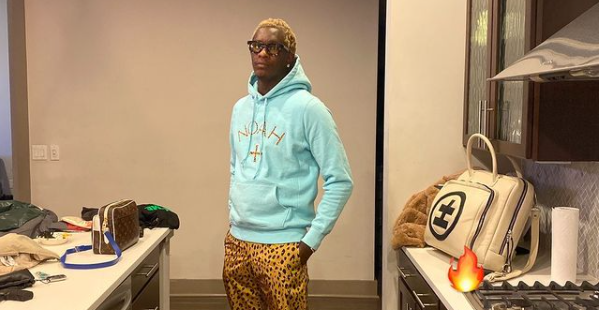 6IXNINE put a little meme up where he was basically like this the guy 2021 slat this who talking about me.

You all know how 6IXNINE is man, 6IXNINE he’d be with the trolling but a lot of times he’d be like able to put certain things into perspective you know he is a rat he a snitch he been saying all that and i honestly just feel like these guys should just stop mentioning his name so he can die off but they keep mentioning his name they keep arguing back and forth with him and they keep letting them live but i think it’s kind of a crazy situation right because normally if he was the typical rapper or if he was a black rapper who was really really from the hood and he had to use that black fan base in order to support his music and to grow it’ll be easy to kill him with the snitch jacket because the people who will be supporting him will care about snitching but it’s different takashi the peach the people who supported him don’t care about snitching so honestly all you doing is giving him marketing when you call him a snitch because you’re gonna call him a snitch and his fan gonna say oh but they was trying to kill his mother oh they was having sex with baby mama oh they was plotting to kill him and the lifestyle that those people come from who listening to his music they like listen if somebody gonna kill me do something to me i’m not gonna have no loyalty to him so i think if they were to just stop mentioning his name his career would die out but they won’t so it won’t die out because he always gonna have that little leverage to pull from to remain relevant.